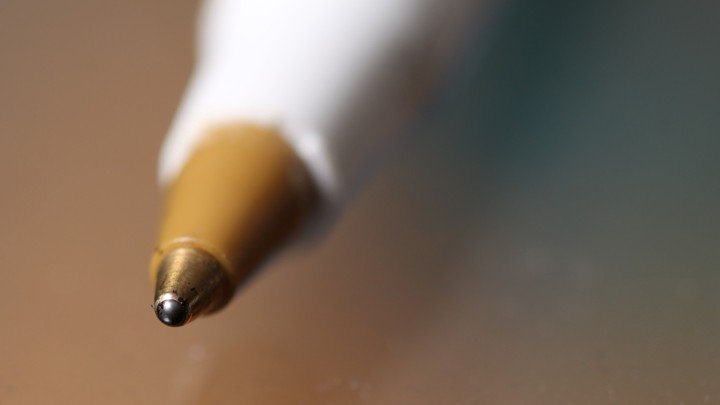 Photo by: Nayu Kim / Flickr
In 2015, Bic launched a campaign to “save handwriting.” Named “Fight for Your Write,” it includes a pledge to “encourage the act of handwriting” in the pledge-taker’s home and community, and emphasizes putting more of the company’s ballpoints into classrooms.

As a teacher, I couldn’t help but wonder how anyone could think there’s a shortage. I find ballpoint pens all over the place: on classroom floors, behind desks. Dozens of castaways collect in cups on every teacher’s desk. They’re so ubiquitous that the word “ballpoint” is rarely used; they’re just “pens.” But despite its popularity, the ballpoint pen is relatively new in the history of handwriting, and its influence on popular handwriting is more complicated than the Bic campaign would imply.

The creation story of the ballpoint pen tends to highlight a few key individuals, most notably the Hungarian journalist László Bíró, who is credited with inventing it. But as with most stories of individual genius, this take obscures a much longer history of iterative engineering and marketing successes. In fact, Bíró wasn’t the first to develop the idea: The ballpoint pen was originally patented in 1888 by an American leather tanner named John Loud, but his idea never went any further. Over the next few decades, dozens of other patents were issued for pens that used a ballpoint tip of some kind, but none of them made it to market.

These early pens failed not in their mechanical design, but in their choice of ink. The ink used in a fountain pen, the ballpoint’s predecessor, is thinner to facilitate better flow through the nib—but put that thinner ink inside a ballpoint pen, and you’ll end up with a leaky mess. Ink is where László Bíró, working with his chemist brother György, made the crucial changes: They experimented with thicker, quick-drying inks, starting with the ink used in newsprint presses. Eventually, they refined both the ink and the ball-tip design to create a pen that didn’t leak badly. (This was an era in which a pen could be a huge hit because it only leaked ink sometimes.)

The Bírós lived in a troubled time, however. The Hungarian author Gyoergy Moldova writes in his book Ballpoint about László’s flight from Europe to Argentina to avoid Nazi persecution. While his business deals in Europe were in disarray, he patented the design in Argentina in 1943 and began production. His big break came later that year, when the British Air Force, in search of a pen that would work at high altitudes, purchased 30,000 of them. Soon, patents were filed and sold to various companies in Europe and North America, and the ballpoint pen began to spread across the world.

Businessmen made significant fortunes by purchasing the rights to manufacture the ballpoint pen in their country, but one is especially noteworthy: Marcel Bich, the man who bought the patent rights in France. Bich didn’t just profit from the ballpoint; he won the race to make it cheap. When it first hit the market in 1946, a ballpoint pen sold for around $10, roughly equivalent to $100 today. Competition brought that price steadily down, but Bich’s design drove it into the ground. When the Bic Cristal hit American markets in 1959, the price was down to 19 cents a pen. Today the Cristal sells for about the same amount, despite inflation.

The ballpoint’s universal success has changed how most people experience ink. Its thicker ink was less likely to leak than that of its predecessors. For most purposes, this was a win—no more ink-stained shirts, no need for those stereotypically geeky pocket protectors. However, thicker ink also changes the physical experience of writing, not necessarily all for the better.

I wouldn’t have noticed the difference if it weren’t for my affection for unusual pens, which brought me to my first good fountain pen. A lifetime writing with the ballpoint and minor variations on the concept (gel pens, rollerballs) left me unprepared for how completely different a fountain pen would feel. Its thin ink immediately leaves a mark on paper with even the slightest, pressure-free touch to the surface. My writing suddenly grew extra lines, appearing between what used to be separate pen strokes. My hand, trained by the ballpoint, expected that lessening the pressure from the pen was enough to stop writing, but I found I had to lift it clear off the paper entirely. Once I started to adjust to this change, however, it felt like a godsend; a less-firm press on the page also meant less strain on my hand.

My fountain pen is a modern one, and probably not a great representation of the typical pens of the 1940s—but it still has some of the troubles that plagued the fountain pens and quills of old. I have to be careful where I rest my hand on the paper, or risk smudging my last still-wet line into an illegible blur. And since the thin ink flows more quickly, I have to refill the pen frequently. The ballpoint solved these problems, giving writers a long-lasting pen and a smudge-free paper for the low cost of some extra hand pressure.

As a teacher whose kids are usually working with numbers and computers, handwriting isn’t as immediate a concern to me as it is to many of my colleagues. But every so often I come across another story about the decline of handwriting. Inevitably, these articles focus on how writing has been supplanted by newer, digital forms of communication—typing, texting, Facebook, Snapchat. They discuss the loss of class time for handwriting practice that is instead devoted to typing lessons. Last year, a New York Times article—one that’s since been highlighted by the Bic’s “Fight for your Write” campaign—brought up an fMRI study suggesting that writing by hand may be better for kids’ learning than using a computer.

I can’t recall the last time I saw students passing actual paper notes in class, but I clearly remember students checking their phones (recently and often). In his history of handwriting, The Missing Ink, the author Philip Hensher recalls the moment he realized that he had no idea what his good friend’s handwriting looked like. “It never struck me as strange before… We could have gone on like this forever, hardly noticing that we had no need of handwriting anymore.”

No need of handwriting? Surely there must be some reason I keep finding pens everywhere.

Of course, the meaning of “handwriting” can vary. Handwriting romantics aren’t usually referring to any crude letterform created from pen and ink. They’re picturing the fluid, joined-up letters of the Palmer method, which dominated first- and second-grade pedagogy for much of the 20th century. (Or perhaps they’re longing for a past they never actually experienced, envisioning the sharply angled Spencerian script of the 1800s.) Despite the proliferation of handwriting eulogies, it seems that no one is really arguing against the fact that everyone still writes—we just tend to use unjoined print rather than a fluid Palmerian style, and we use it less often.

I have mixed feelings about this state of affairs. It pained me when I came across a student who was unable to read script handwriting at all. But my own writing morphed from Palmerian script into mostly print shortly after starting college. Like most gradual changes of habit, I can’t recall exactly why this happened, although I remember the change occurred at a time when I regularly had to copy down reams of notes for mathematics and engineering lectures.

In her book Teach Yourself Better Handwriting, the handwriting expert and type designer Rosemary Sassoon notes that “most of us need a flexible way of writing—fast, almost a scribble for ourselves to read, and progressively slower and more legible for other purposes.” Comparing unjoined print to joined writing, she points out that “separate letters can seldom be as fast as joined ones.” So if joined handwriting is supposed to be faster, why would I switch away from it at a time when I most needed to write quickly? Given the amount of time I spend on computers, it would be easy for an opinionated observer to count my handwriting as another victim of computer technology. But I knew script, I used it throughout high school, and I shifted away from it during the time when I was writing most.

My experience with fountain pens suggests a new answer. Perhaps it’s not digital technology that hindered my handwriting, but the technology that I was holding as I put pen to paper. Fountain pens want to connect letters. Ballpoint pens need to be convinced to write, need to be pushed into the paper rather than merely touch it. The No.2 pencils I used for math notes weren’t much of a break either, requiring pressure similar to that of a ballpoint pen.

Moreover, digital technology didn’t really take off until the fountain pen had already begin its decline, and the ballpoint its rise. The ballpoint became popular at roughly the same time as mainframe computers. Articles about the decline of handwriting date back to at least the 1960s—long after the typewriter, but a full decade before the rise of the home computer.

Sassoon’s analysis of how we’re taught to hold pens makes a much stronger case for the role of the ballpoint in the decline of cursive. She explains that the type of pen grip taught in contemporary grade school is the same grip that’s been used for generations, long before everyone wrote with ballpoints. However, writing with ballpoints and other modern pens requires that they be placed at a greater, more upright angle to the paper—a position that’s generally uncomfortable with a traditional pen hold. Even before computer keyboards turned so many people into carpal-tunnel sufferers, the ballpoint pen was already straining hands and wrists. Here’s Sassoon:

We must find ways of holding modern pens that will enable us to write without pain. …We also need to encourage efficient letters suited to modern pens. Unless we begin to do something sensible about both letters and penholds we will contribute more to the demise of handwriting than the coming of the computer has done.

I wonder how many other mundane skills, shaped to accommodate outmoded objects, persist beyond their utility. It’s not news to anyone that students used to write with fountain pens, but knowing this isn’t the same as the tactile experience of writing with one. Without that experience, it’s easy to continue past practice without stopping to notice that the action no longer fits the tool. Perhaps “saving handwriting” is less a matter of invoking blind nostalgia and more a process of examining the historical use of ordinary technologies as a way to understand contemporary ones. Otherwise we may not realize which habits are worth passing on, and which are vestiges of circumstances long since past.