The FDA has remarked that  we need to revisit some of the regulations that would have been implemented shortly. In some ways it gives cigar manufacturers a little breathing room to argue their products should not be regulated as other tobacco products are or will be. The regulations revuew will  be pushed back 4 years.
The good part of this is cigar manufacturers are given a chance to comment their products need to be looked at differently than other tobacco products and vapes too.
The down side is the cigar manufacturers still may need to implement very costly testing requirements that still could sink the business and impact all consumers of fine cigars.
At least this is the first break the cigar industry is getting from the FDA I think under pressure from many fronts. Let’s see where this goes.
Keep smoking

The Food and Drug Administration had ordered cigarmakers to send the agency detailed ingredients and manufacturing processes for each of their products, complete with lab testing, by February. The same requirements applied to makers of pipe and hookah tobacco.

But late last month, the date for cigarmakers was pushed to August 2021.

The premium cigar industry will use the added time to fight for exemption from the new requirements. Proposed legislation supports exemption and the FDA seems open to it.

“This is an opportunity,” said Eric Newman, president of J.C. Newman Cigar Co., the last operating cigar factory in a city that once was the capital of the industry worldwide. “It is an opportunity to keep cigars in Cigar City.”

At issue is the Family Smoking Prevention and Tobacco Control Act, granting the FDA authority to regulate electronic cigarettes, vaporizers and cigars in the same manner as it does cigarettes.

Tobacco products on the market before February 2007 are grandfathered in and need not undergo the testing. With a tobacco product introduced after that date, but before Aug. 8, 2016, filing an application proving it is similar in makeup to a grandfathered item would allow the product to remain on sale while the FDA reviews the application.

But that’s an expensive prospect.

The FDA estimates proving this “equivalency’ would come with a price tag of between $1,433 and $22,787 per cigar blend.

Newman estimates he has 500 cigars that come under the August 2016 deadline. He says testing costs could force him to quit selling some existing blends. Now he has an additional 31/2 years to submit the test results.

As for cigars developed after the August 2016 date? Newman said he doubts manufacturers are developing any because of uncertainty over the future of the FDA regulations.

If the testing requirements stick, he said, he may not introduce as many new cigars in the future and may even close his factory.

Newman said he wonders how smaller, hand-rolled cigar operations throughout Tampa will handle the financial burden.

Makers of e-cigarettes stand to take an even bigger hit, with estimates on testing of new products at six figures. These manufacturers won a delay until 2022.

“The sentiment in Washington is that overregulation kills small business,” Newman said. “We hope that sentiment gives us relief.”

The FDA said it delayed the review process in part to balance regulation and development of products that may be less dangerous than cigarettes.

That doesn’t sit well with backers of the new regulations, including Matthew Myers, president of Campaign for Tobacco-Free Kids. The delay allows e-cigarettes and cigars “in flavors like cherry crush … to stay on the market with little public health oversight.”

The premium cigar industry seeks immunity on the grounds that its products are natural, defined as made from 100 percent tobacco. But Myers counters that there is no compelling public health argument to justify the postponement.

Tobacco, the FDA says, causes more than 480,000 deaths annually in the United States.

Other parts of the Tobacco Control Act remain untouched. For instance, starting next year, new, larger warning labels must be placed on cigar boxes.

And the FDA says it plans to “solicit additional comments and scientific data related to the patterns of use and resulting public health impacts from premium cigars.” No time line for the process has been announced yet.

“That’s promising,” said lawyer Anna Wiand, who specializes in regulated products for GrayRobinson in Tampa. “The FDA specifically said premium cigars. It’s not great news because this isn’t over yet, but it is good news.” 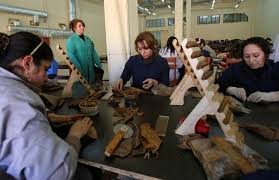