Cigar news: I enjoy reading other cigar bloggers who review product. It’s always a smart idea to get other viewpoints as I state in my cigar reviews. Additionally there are so many brands , no way can you keep up with them all. 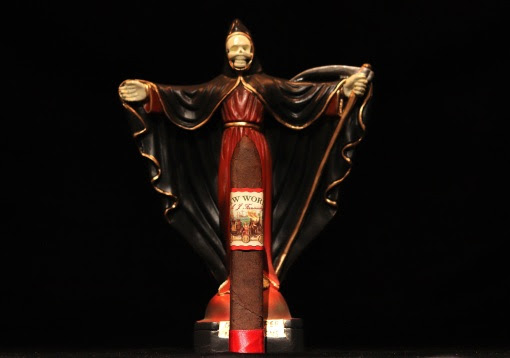 The New World line from AJ Fernandez marks the first time he and his father Ismael have worked together to make a cigar. They consider this line is a nod to the discovery of tobacco by Christopher Columbus and its introduction to the rest of the world in 1492. This core line debuted in 2014, then followed by New World Connecticut in 2015 and New World Puro Especial in 2017.

This cigar comes covered in a dark chocolaty wrapper that has very little veining and feels smooth to the touch. The seams are hardly visible and has the expected firm feeling from being box pressed. The body has the smell of cedar, earth and a bit of sweetness. The cigar cuts easily causing no damage, the preflight draw is easy and there is a noticeable flavor of dried apricots.

The first half inch has a good pepper kick to it but quickly settles into a more mellow smoke. It has a fresh baked bread like feel to it with chocolate and pepper on the finish. The smoke production is ample and it burns even requiring no touch ups.

The second half finds the spice and pepper intensifying again, there are loads of pepper with just a touch of sweetness and ends with the flavor of dark chocolate and pepper. Others have equated it t a Mexican hot chocolate and I’d say that’s probably a pretty accurate description. There is plenty of heavy weighted smoke given off and a burn that remains perfect for the entire cigar.

When it comes to finding cigars that are good but won’t break the bank the choices start to dwindle however, with the New World line you’re in luck. The chance to get a complex yet smooth cigar for under $8.00 is not easy these days. I felt this cigar landed on a profile of medium full to full combined with what I think was a fair amount of nicotine strength (everybody’s opinion is different on this and this is just mine) made this a great cigar. When you see them in your shop get at least a handful, at this price you can’t lose.